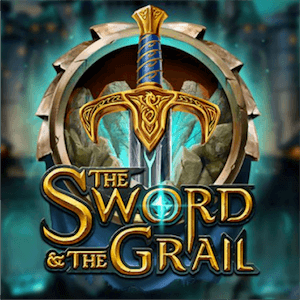 The latest title by popular online video slot developer Play’n GO channels the myth and mystery of Arthurian legend to yield an engaging gaming experience. As its name suggests, The Sword & The Grail is themed around the legend of King Arthur and his Knights of the Round Table, with an array of detailed symbols and other thematic elements to immerse players in Arthur’s world.

Set to a suitably epic soundtrack of trumpets and cellos, The Sword & The Grail follows the adventures of King Arthur in the mythical land of Camelot. Arthur is accompanied on his quest by his trusted advisor and druid, Merlin; closest friend, Lancelot; and beautiful Queen Guinevere, all of whom feature as symbols on the reels.

The backdrop of the reels changes from round to round but always features some view of Camelot Castle – be it as an imposing presence on the horizon or, from within, a sprawling palace of granite and stone.

As you may have guesses, the twin focal points of the game are the Holy Grail and the legendary sword, Excalibur. In the world of Play’n GO, the Grail is sought after because it is a wild symbol capable of standing in for other symbols to complete winning competition. The Grail further boosts winnings with its multiplier feature. Excalibur, meanwhile, is The Sword & The Grail’s scatter symbol, capable of triggering free spins for more chances to win.

The Quest for Excalibur

When three or more sword symbols appear anywhere on the reels, The Sword & The Grail’s free spins bonus round, including a 2x multiplier, is activated. Initially, players are awarded five free spins, but it doesn’t necessarily end there.

If players are able to gather six more swords, they enter a second stage of free spins, complete with a 5x multiplier. Collecting six swords unlocks the third stage with a 10x multiplier, while the fourth and final stage is activated by 18 swords and includes a generous 100x multiplier.

The Sword & The Grail online video slot is available to players on all operating systems, including iOS, Windows and Android.

This, the latest five-reel title by leading Maltese developer, Play’n GO features an engaging Arthurian theme and an array of features to enhance winnings and playability